In 1998, when I taught at Howard Luke Academy in Fairbanks, Alaska (named after Athabascan Elder Howard Luke), I developed a Native American Literature class, the first in the Fairbanks School District. I felt a need to offer a class in which the students could see themselves reflected in what they read. One of the books I used was N. Scott Momaday’s In the Presence of the Sun (1991). Momaday is proud of his Kiowa Plains Indian culture. In one section of the book he writes a series of sixteen shield stories. He explains the importance of shields to Plains Indian cultures. He speaks of the shield as protection, of course, but he also writes that a shield is “medicine” (p. 73).

The shield bears a remarkable relationship to the individual to whom it belongs. Indeed the relationship is so immediate, so intimate as to be virtually impossible to define. In a real sense, the Plains warrior is his shield. It is his personal flag, the realization of his vision and his name, the object of his holiest quest, the tangible expression of his deepest being. In bearing his shield he says, “My shield stands for me, andI stand for my shield. I am, and I am my shield!” (p. 74)

In the book, Momaday has written sixteen shield stories. He has specific directions for how they should be shared. He reminds his readers that the sixteen stories are four fours, and four is a sacred number (p. 75).

And the shields are mediations that make a round of life. The shield stories are meant to be told aloud, either to oneself or to another or to others, on eeach day for sixteen consecutive days . . . The stories ought to be told in the early morning or late afternoon, when the sun is close to the horizon, and always in the presence of the sun. (p. 75)

So for sixteen days in March of 1998 (late March and April and sometimes May are breakup time in Fairbanks; lots of sun but still cold with hints of spring), we went outside, stood in a circle, and read one of Momaday’s shield stories each day. We talked about the power of each of the stories, and each student discussed their favorite one. It was then that they were ready to create their own shields and their shield stories.

Lacking buffalo hide, I purchased a bunch of muslin and some embroidery hoops. The students had to cut their own muslin to fit the size of the hoop they chose (the hoops were in two different sizes; in Fairbanks back in 1998, before all the big box stores arrived, I had to take what I could get in local stores; online shopping wasn’t very prolific). After cutting their muslin and fitting it onto the hoops, they created their design on paper. Then they transferred their designs onto the muslin with pencil. The next step was painting the design. I allowed about two weeks for this project; the painting was time consuming and I did not want to rush the process. After the shields were completed, each student named his/her shield and wrote a story about it, in the same vein as Momaday’s stories.

The students shared their stories and shields with each other, and then we hung them in the hallway. I do not remember how I managed to end up with the bulk of the shields, but I am grateful the students gave them to me. Over sixteen years later, they have even more resonance to me than they did back then. I feel blessed to have them, and blessed that I received permission to share some of them here.

I do not have all of the stories, and again, I don’t know why. I am grateful for the ones I have. What I am left with is how powerful the shields and stories are and how the project resonated with the students. I continue to do this kind of work in my classes—including my college classes—and also with the teens I work with in juvenile detention. I have found that even the toughest adolescents will engage in deep inner work if it is presented in a way that touches the profoundly deep, soft part inside themselves—some might call it the soul. I personally believe that everyone wants to be healed. Some just need more help than others in accessing their self-healing abilities. I also believe that even a small project over the short term can plant a seed and make a difference. It can be “medicine.”

The Double Life Shield by John

Once long ago were the star gods, Libra and Scorpio. They were forbidden to be together because Libra was an air god and Scorpio was a water goddess. So each time they saw each other, it was in secrecy.

The star gods’ children were the guardians over the human children born at the same time. The guardians were to keep the humans balanced in their way of earth, air, fire, and water.

With Libra and Scorpio’s secret meetings they conceived a child. Scorpio was frightened at the thought of the other gods finding out. They did all they could

This human child grew up living a double life. That was the only way the guardian could keep the human child balanced.

Julie’s Shield (It is hard to see in the photo, but the buffalo’s eyes are pieces of turquoise.) 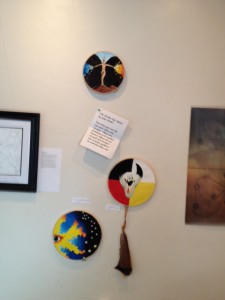 Beth Horikowa is a student in the Licensed Clinical Mental Health Counselor Track of the MA in Psychology and Counseling Program at Goddard College. She participates in the Expressive Arts Therapy Emphasis.